Who was to Blame for the English Civil War? 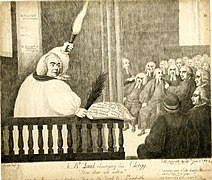 A table of who blamed whom, with a conclusion.

The English Civil War, as with most religious wars, is another case of Catholics blaming Protestants, Protestants blaming Catholics, peasants blaming king, king blaming peasants. Everyone blames each other for a long war over who has the right to the church. Even though both sides are Christian, they still manage to find a reason for killing each other. Then we have King Charles, who believes that he is God’s true emissary and that everyone should worship him – and makes all his decisions based on that judgement. History tells us that it is never a good idea to have two main religious groups under the rule of a greedy king. However I think that Charles was probably the biggest catalyst in the war: By meddling with the Church of England’s affairs, Charles made the Protestants angry. They then took their anger out on the Catholics, who fought back, causing war. If only Charles hadn’t been so pushy, arrogant and full of himself, he might have been able to maintain peace between the two faiths. From what I have seen, heard and read, Kings and Queens have a habit of getting into huge arguments with either the Pope or their Bishops. There have been many wars caused by political fallouts, or money, or powerful villains wanting to rule the world, but a staggering number of battles, wars, rebellions and terrorist actions have been caused by the inability of two different religions to get along with each other. Since history began, millions of people have died fighting over what they believe to be the one true faith. With that in mind, I’d say the person who really caused the Civil War was God.