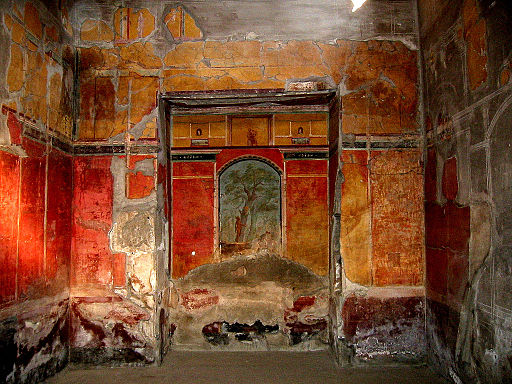 A description of the public baths used in ancient Rome.

Public baths were a common feature in many Roman towns and cities. They were used by men and women of all ages to wash, exercise and meet acquaintances.

A visit to the baths would begin with the palaestra. The palaestra was the main exercise area, in which people would take part in activities such as ball tossing, wrestling and fencing. This is where a person would first meet with their friends and colleagues. A short while later, they would pass through the apodytērium. Here they would strip naked and give their clothes to a slave, who would place them in a recess in the wall until later.

The next stage of the baths was the tepidārium. This was a large room where the walls were lined with benches. The room was kept at a mild temperature, allowing visitors to slowly warm up and prepare for the caldārium where they would bathe in a large hot bath and have slaves clean them with oil. For this, the visitors would lie down on the floor and slaves would massage the oil into their skin. Then the slaves would scrape the oil (and bodily dirt) off using various strigils. Strigils were blunt metal scrapers, each was designed to scrape a different part of the body. A long, flat scraper, for instance,would be used on the back, while a short, curved variety was needed for the arms and legs. After this, the slaves would give the visitor a massage, then they would proceed to the frigidārium to cool off in the cold plunge pool, then go back to the apodytērium to get dressed and go home.

The tepidārium and caldarium were heated by a system called the hypocaust: The floors of all the rooms were suspended on numerous stacks of bricks, fires would be lit outside, and the heat would be channeled into the spaces beneath, warming the room above it. Sometimes the walls would all be made hollow as well, allowing the heat to flow all the way around a room.