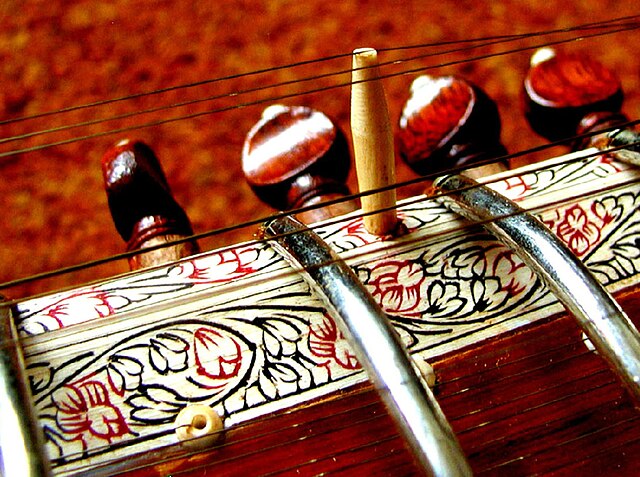 A task to research up to eight Indian musical instruments including sitar and tabla.

The Sitar is one of the most famous Indian musical instruments. Despite the physical resemblance and similar sounding name, it is not technically related to the guitar, but to the lute family. A typical Sitar will have nineteen strings, of which four will be drone strings, four will be playing strings and eleven will be sympathetic or resonating strings. Players pluck these strings with a mizrab (a plectrum made of wire).

The word Tabla refers to a pair of drums. The right-hand drum (dayan) is small and wooden, the left-hand drum (bayan) is normally made of brass, coated with chrome or nickel. The skin of each drum has a large black spot in the centre. These spots, composed of iron filings, soot and gum, create a timbre which is similar to that of a bell.

This is the Indian version of an Oboe, with four reeds (two upper, two lower) and eight holes which are sometimes plugged with wax. The Shenhai is made primarily of wood but the bell is composed of brass. The Shehnai is often used in temples because of its distinctive sound, and often appears at North Indian weddings.

The Tambura is a drone instrument known for its rich sound. There are three different types of Tambura: Marij, Tamburi and Tanjore. The Marij style is 3-5 feet long with a rounded resonator chamber and a straight hollow neck. At 2-3 feet long the Tamburi style is the smallest. This has made them increasingly popular in recent years due to their portability. The Tamburi style has five strings and is tuned to a higher octave. They are often used by solo artists. The Tanjore style is again 3-5 feet long and features a spherical lower chamber made of solid wood.

The Bansuri is a very old instrument which for thousands of years has been used by shepherds and folk musicians. These Indian flutes are carved out of reeds and bamboo, with six or seven holes along the shaft. The Bansuri is a very simple instrument to play and requires little tuning beforehand. In large groups of players the Bansuri is normally used as a Soprano instrument. Their tunes are also commonly found in film music.

The Santoor’s strings vary in number. The number can range from twenty-four to one hundred. The Santoor is played by striking the strings with a light wooden mallet, producing a vibrant sound. The name Santoor is derived from a Persian word meaning a hundred strings.