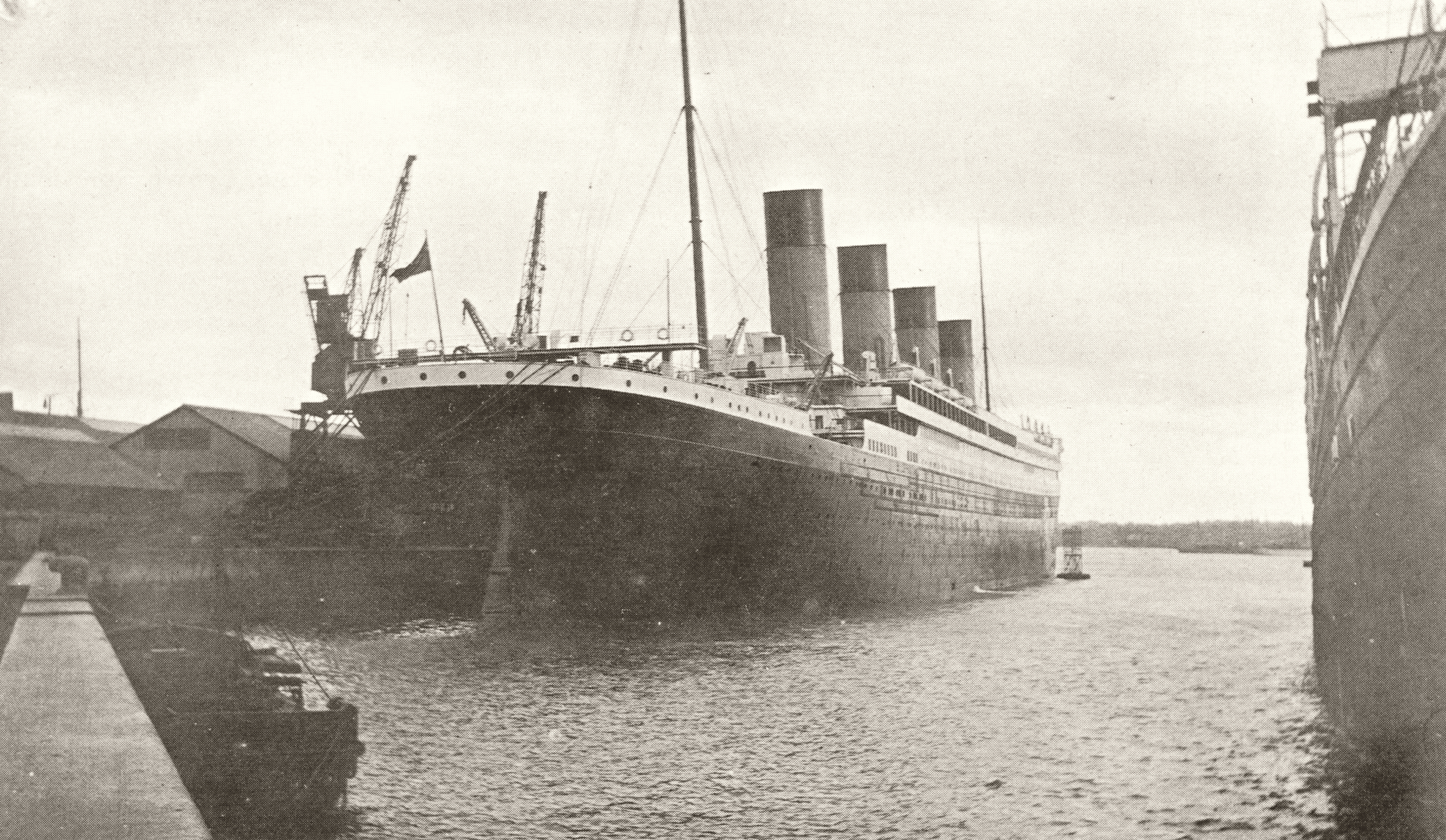 A short story about one or more passengers on the doomed maiden voyage of the RMS Titanic.

The cold water quietly washed along the huge metal hull as the enormous ship sat in the dock to await the coming passengers. All around the harbour there was a gigantic swarm of people rushing towards the water. In amongst the bustling crowd was a middle-aged couple involved in what had been the fifth such argument of that day.

As the couple moved forwards, their bickering became louder and louder until finally they stopped to look at where they were going. There an incredible sight met their eyes: standing before them was the largest vessel they had ever seen: the vast black hull seemed to dwarf the entire county, and the great white superstructure above it seemed like a palace, with four huge funnels poking up into the heavens. As the couple gazed at the magnificent machine that stood before them, they knew there were in for a considerable treat.

Before the cruise could begin, however, there was the matter of getting on board: access, it seemed, could only be achieved via a small metal causeway from the edge of the deck to the ship’s hull. At the end of the causeway was a surly-faced guard clumsily ushering hordes of middle class people towards the ship. After standing rather impatiently behind the bustling crowd, they finally reached the guard. The guard lazily stared at them and said

“Let me see your tickets!” A large ticket was handed to him, which he then snatched up and shouted,

“Thomas and Anita Brooklands, Second Class!” He then looked back at the couple and asked the gentleman “So”, he checked the ticket, “Thomas, what brings you aboard?” Thomas, taken by surprise, gulped and replied

“We are going to America to sell some of our wine!” interjected Anita. The guard, evidently finding this hilarious, chortled

“And which of you’s gonna do the deals? Will you do the talkin’, or ‘sit gonna be old stutter box? Heh heh heh!!” Seeing Anita’s look of stern disapproval, he cleared his throat and, with an obviously forced smile, gestured towards the ship. Thomas and Anita were all too happy to continue.

Thomas felt deeply embarrassed: his stammer had come back. When he was a small child, his father had always been ashamed of his son’s attempts to speak.

“How” he would often grumble “are you to carry on the Brooklands legacy if you cannot even manage to get a sentence out of that jittering mouth of yours?” Thanks to the constant stammer, Thomas had never been the great figure that his father had hoped for. Edward Brooklands had one of the largest vineyards in Britain, and had made enough money to buy a huge country mansion. Thomas, on the other hand, was struggling to sell a single bottle without assistance, and his family had long since lost all faith in him.

As Thomas arrived aboard, all these memories were swiftly pushed to the back of his mind by the sights which greeted him: the interior walls of the ship were as grand as those in the mansion, and the room that they were in contained the grandest staircase that either Thomas or Anita had ever seen. Indeed, Anita seemed to be struggling to take in all of the grandeur; she stood in the centre of the floor, quietly pivoting on one foot and spinning around to look at every nook and cranny in turn. Thomas was now rather glad that this was only the Second Class area, as anything more luxurious might have caused her to faint. Clearly, this was going to be an interesting voyage.

Four days had now passed since boarding, and Thomas was finally starting to enjoy the trip. After making such a scene in the entrance hall, Anita had finally settled down and accompanied Thomas to explore the ship’s luxuries. They had loved the dining hall in particular, as it easily put the best restaurants to shame. Afterwards, Anita would always bury herself in the library for hours, which somewhat irritated Thomas as the smoke room was always full of drunken men smoking several cigars at a time, and nearly setting the wood panels on fire! Best of all, though, was that the stammer had all but disappeared, allowing him to negotiate a deal for three cases of his father’s wine with another eccentric gentleman over dinner. It didn’t seem that anything could possibly go wrong…

“Thomas! Thomas! Oh Tommy, wake up!” cried the shrill voice from beyond Thomas’ dreams. At last, after much shaking of the bed, Anita got his attention.

“W-W-W What’s happening?” he asked, sitting bolt upright on the bed “Is everything alright? You haven’t seen another black cat have you?” Anita looked terrified. All around him, Thomas could hear confused murmurings and anxious gasps. Anita wailed

“Thomas, come quick: I think we’ve hit something!” Thomas quickly got dressed and ran out of the door. When they reached the promenade, it all became clear: there was ice all over the deck, and the ship was leaning slightly to one side. Thomas slowly turned to Anita and stuttered

“I-I-I T-T-Think w-we’re sinking!” At that moment, Anita gave a scream of terror that made everyone on the deck hold their ears. Then she shouted

“We’re sinking! WE’RE SINKING!!” and all around her the other passengers started to panic and rush around. Thomas deeply wished he had been wrong.

For a long time there was silence from the crew, and the passengers were not as jittery (granted, the ship still felt relatively calm given that it had supposedly rammed an iceberg), but Anita was still insistent that they should get ready to leave as soon as possible. She and Thomas were in their cabin, meticulously packing away everything they had brought with them. It was then that they heard someone shout.

“Quickly, let’s get off this wretched ship!” and Thomas was only too happy to agree.

Getting there, however, was easier said than done, because there seemed to be no way of accessing the lifeboats from their current position. At last, after much desperate searching, they found a way in, but it was guarded by a large thug with a red face and a menacing frown.

“And just where do you think you’re going?!” he roared at the couple “This area is First-Class only!” Thomas saw that any reasoned argument would be impossible and that anyway he had no time, so he dug deep into his coat pockets and pulled out as many coins as he could find. He looked back at the guard and held them above his head. The guard looked blankly at them for a moment, then replied “Works for me!” and stepped aside. Tossing the coins in the air, Thomas sped across the deck, with Anita breathlessly following. Thomas saw her glare at him.

“What did I tell you?” she piped “I knew we should have gotten First Class tickets!”

When they finally reached the boat deck, the commotion was unbelievable: the First Class passengers were all pushing and shoving to get away, while gormless crewmen tried in vain to hold them back with cries of “Women and children only; NO MEN!”. Many of the wealthy lords were helping their less-than-grateful wives into the enormous wooden boats. Thomas and Anita tried to blend in with the crowd as they headed for the next boat. Anita was losing her nerve. “Oh, Thomas, whatever will happen to me?” she wailed.

“You’ll be perfectly fine.” replied Thomas, as the lifeboat was moved  into position.

“Right,” called one of the crewmen, “In ya come!” As the front row of the bustling crowd moved forwards, Thomas led Anita to where the guards were ushering them. Trying to seem helpful, Thomas picked Anita up by her waist and tried to lift her across the edge of the deck. Then there was trouble: As the passengers hurried to evacuate, one of them violently knocked the davvy holding the lifeboat up, and the craft swung forward, leaving Anita directly above the icy water. She started to panic, screaming and wriggling as Thomas frantically tried to pull her back on board. Just as Thomas thought he had regained his grip, disaster struck: the passengers, shocked at how unstable the lifeboat seemed to be, were in a frenzy of panic, and were clumsily rushing around the deck. As Thomas was lifting Anita up, a rather heavy man came thundering past him and crashed, hard, against Thomas’ back. Thomas began to lose his balance and ended up leaning forward. Anita then seemed to become heavier and heavier before finally she slid out of his hands altogether. Thomas watched, aghast, as she plunged, without even a faint whisper, into the water and then disappeared into the deep blackness. Thomas began to look around helplessly, trying to come to terms with what had just happened

“A-A-A-A-Anita! N-N-Noooo!!”. He caught the eye of another passenger and said “M-m-m-my-” but words now completely failed him. He looked glumly at the ocean, and saw only a black nothingness.