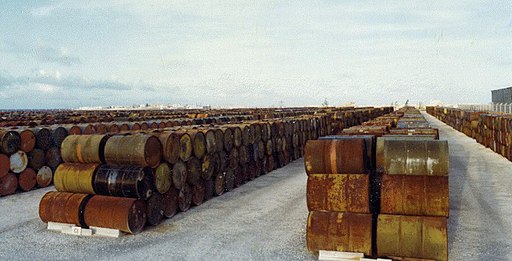 What it contained and how it worked.

During the Vietnam War, the United States military embarked on a chemical warfare program (known as “Operation Ranch Hand”) in the hopes of uncovering Viet Cong soldiers by destroying the vegetarian under which they had hidden.

Agent Orange is one of the most (in)famous chemicals used. It was an even mixture of two compounds, 2-4-D and 2-4-5-T.

2-4-Dichlorophenoxyacetic acid (C8H6Cl2O3) is a synthetic plant hormone which is absorbed through the leaves to cause death by massive overgrowth and subsequent withering. The auxin is used commonly as a weedkiller in America.

The other half of the Agent, 2-4-5-Trichlorophenoxyacetic acid, was a similar substance. It too is a synthetic auxin intended for use as a herbicide, but has been long banned due to health concerns. While not especially toxic in itself, it is often contaminated with a far more harmful substance during manufacture (2-3-7-8-Tetrachorodibenzodioxin, or “Dioxin”). TCDD is highly carcinogenic, and has been known to affect how different genes are expressed in certain organisms. It cannot cause cancer alone, but can increase the risk from other carcinogens which are also present.

The use of Agent Orange in Vietnam caused widespread health problems for plants and animals. There were 400,000 deaths caused by the campaign and 500,000 deformed newborns. Traces of dioxin were found in the breast milk of Vietnamese mothers, and many residents in the affected areas today still carry genetic diseases.

If you are interested in other aspects of the Vietnam War, why not see this essay.