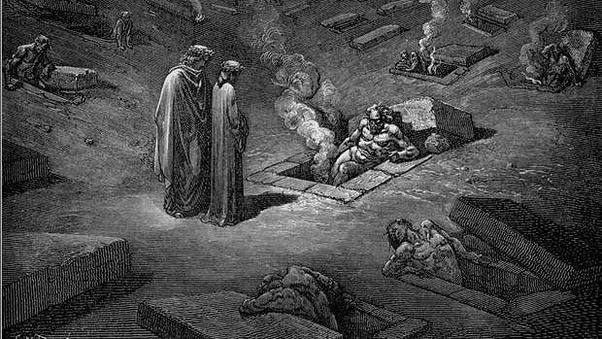 A description of the Nine Circles of Hell.

Dante’s Inferno is the first part of Divine Comedy, a poem written by Dante Alighieri, an Italian poet, in the fourteenth century. Inferno is a fictional recount of Dante’s journey through the Nine Circles of Hell (as the medieval people envisioned it).

Limbo, Dante found the atheists; people who had never been baptised and despised Christianity. The first circle is not particularly horrific; in fact, Limbo is rather like a grassy meadow. This circle is designed to show atheists (who may not technically have sinned) that they can never quite reach heaven.

Lust, is, unlike Limbo, a place of true punishment  People who, in life, have grown so in love for another that they have lost their minds, having been completely overcome by sexual temptation. Their souls are forever caught in the winds of a violent storm, never to rest.

Gluttony houses people who have overindulged in various addictions and grown uncaring of others. The gluttons lie in a foul slush, guarded by a three-mouthed monster.

Greed is the place home to the souls of those who have fallen victim to great greed over their lives. Their souls are split into two groups: The Avaricious  who hoard money and the Prodigal, who mindlessly throw it away. These two groups are forced to joust each other, using enormous sacks of money as weapons.

Wrath and Sullenness is home to an eternal fight amongst the wrathful on the surface of the river Styx, beneath which lie the sullenly who are locked in a place where they can find no joy in God or the universe.

Heresy is filled with flaming tombs, housing those who do not believe in any afterlife at all. These heretics are completely dead, with no thought, no feeling and no future.

Violence is split into three rings. In the outer ring, reside the souls of people who are violent against people and property. Their souls are thrown into the river Phlegethon (boiling blood). In the second ring, the suicidal are turned into gnarly bushes and trees, which are then eaten by Harpies. In the innermost ring, the blasphemers are left in a desert where flaming flakes fall from the sky. This circle is guarded by the Minotaur.

Betrayal is the final (and therefore presumably worst) circle of Hell. The ninth circle is split into four rounds, depending on what sort of traitors its inhabitants are:

Waist deep in the ice, in the centre of the ninth circle, is Satan (three-headed) who bites and claws at his three prisoners: Judas, Brutus and Cassius (who assassinated Julius Caesar), beneath Satan is the centre of the earth, Dante and Virgil’s escape route from Hell.