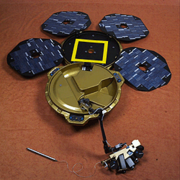 Exploring the physics behind the crash protection, and explaining why it failed.

Beagle 2, named after Charles Darwin’s HMS Beagle, was a British space probe, launched in 2003, which was intended to land and conduct scans on the surface of Mars in the hope of discovering signs of life. The mission failed when contact was lost and the spacecraft was thought to have either crashed or burned up in Mars’ atmosphere.

The Beagle 2 lander was a dome shaped object which was meant to safely land on the surface of Mars and then open out to deploy various pieces of equipment attached, including a UHF antenna, several solar panels and a robotic arm. To ensure that the craft made soft touch-down, it was equipped with a set of parachutes meant to deploy a set time after entering the Martian atmosphere.

In the original plan, Beagle 2 was to be released from the Mars Express Orbiter and fired towards Mars on December 19th. By Christmas Day, it was expected to have reached the threshold of the atmosphere. At this time, the Beagle would be travelling at a velocity of more than 20000km/h and thus could not land without being destroyed. To slow the descent, parachutes would be opened when the craft reached an altitude of 200m. To save on development costs, the parachute designs were replicated from the Huygens probe, then being carried towards Saturn. The parachutes would reduce the descent velocity of the lander, but would not guarantee a soft landing, so the surfaces of the lander was equipped with large airbags.

Whereas car airbags fire inside the capsule while allowing the outside to crumble, Beagle 2’s airbags would inflate around the outside and form a large cushion of air around the bottom of the craft to absorb the impact. The bags would deflate upon landing, allowing the craft to open. Helping this would be the gravitational field strength of Mars, which is only 3.7N/kg, compared to 10N/kg on Earth. The lander’s weight would therefore be reduced and thus the crash forces substantially lessened.

In reality, however, it is not known is the Beagle 2 ever landed at all, as the craft was never rediscovered after contact was lost. Subsequent investigations have come up with several explanations for what may have happened. Most such theories relate to the airbags and parachutes deploying at the wrong time. Whereas the ideal design would have included acceleration sensors which would deflate the airbags when the craft came to a standstill, ESA (lacking the resources if an equivalent NASA mission) instead resorted to a less expensive timer, with an educated guess having been made at when the touchdown would take place. Had the timer finished too early, the airbags would have been rendered ineffective at cushioning Beagle 2, which might thus have been destroyed in the crash. Another theory suggests that the parachutes (whose strap was reduced to save weight) may have entangled the probe and prevented it from opening, with the airbags causing the fast moving object to bounce back up to the inside of the chute. Finally, there is a theory that a programming error may simply have sent the lander off course so that it missed Mars entirely (which is possible, as a minor coding problem at NASA once caused the Mariner 1 spacecraft to be destroyed shortly after launch). The real story of Beagle 2’s loss may never truly be known.