Why Did the Cold War Start? 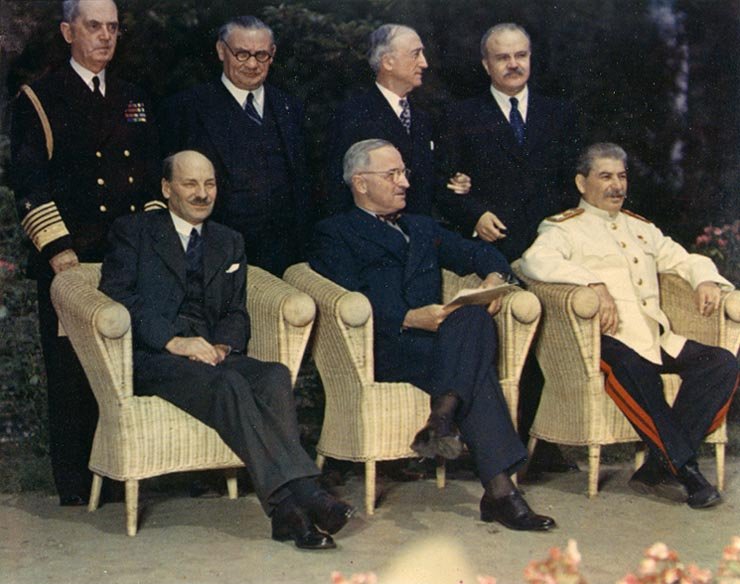 An essay on the beginnings of the conflict.

In the mid twentieth century, three superpowers dominated the geopolitical landscape: the UK, the USA and the USSR. These three countries had, recently, been working together to defeat a potential usurper power – Nazi Germany – from taking over much of the civilised world. It may have briefly appeared that the “Big Three” could remain firmly united by their victory, but soon it became clear that this could never be.

Perhaps more accurately, the Cold War was not a breakdown of the alliance, but proof that it never truly existed to begin with. The reason was that the great powers had achieved their status by very different means. The British had seen a wave of brand new technology far beyond its time invented so that they could maintain their vast colonial empire. The Americans had exploited their convenient bounty of natural resources to mass produce consumer goods to sell to each other. The Soviets had urgently industrialised out of a desire for mere survival against a less-than-friendly world. The most noticeable and thus most polarizing difference, however, was the contrast between capitalism and communism.

Britain and America believed in the ideology by which individuals – and companies – would work for their own personal or corporate benefit. They also believed in private property, the right to personal ownership of wealth, and the use of consumer goods to improve one’s standard of living. Under capitalism, society would advance because rival businesses would invent, design and sell better products to beat one another, and thus the goods and services available would forever evolve into superior versions of themselves.

The Soviet Union (as well – later – as China and North Korea) believed in a different ideology, whereby all people – specifically “the workers” – would cooperate for the benefit of everybody. They also believed in collectively owned property, the right to public distribution of wealth, and the rejection of consumerism. Under communism, society would advance because non-competitive innovators would invent, design and distribute better products specifically to better the lives of the people, with goods and services thus forever evolving as part of the quest to build a brighter future.

Also important was the difference in perception of the role that the government should have in people’s lives. Many Americans were opposed to “big government” and wanted the state to have as little power as possible, with responsibility for infrastructure and services delegated to smaller forms of government, or handed over to private industries. They also believed that virtuous individuals had earned the right to enjoy a higher standard of living, while lazy or careless people would be rightfully punished with one much lower. It was considered wrong for the government – and thus the taxpayer – to take responsibility for individuals’ personal decisions. Most communists believed that a large government was necessary to ensure that all people remained equal. They thought it unfair that some should live in lavish luxury while others starved. Under Marxist theory, only the communist state could understand “the engine of history”, meaning the eternal class struggle between the rich and poor. The state was believed to be an omniscient superpower, and the only establishment capable of managing the lives of the USSR’s entire population. The government was therefore to be given near total control over every aspect of people’s lives, thus ensuring that no individual could profit at the expense of another. Overall, then, the twin ideological peaks of communism and capitalism could hardly be more different, and nor could the personalities of those who followed them. Perhaps, if the two groups remained permanently isolated from one another, these differences would go largely unnoticed, or at least unremarked upon, so they could peacefully co-exist with relatively little friction. The decisions made at the Yalta and Potsdam conferences, however, meant that this was no longer possible.

When Winston Churchill, Josef Stalin and Franklin Roosevelt met at the Summer Palace in Ukraine to discuss their post-victorious plans to deal with the former axis powers, they managed – or at least appeared – to get on rather well on a personal level, even if their respective political beliefs clashed alarmingly. While on the surface the façade of friendliness may have seemed genuine, behind the scenes tensions were already mounting. While the three leaders agreed that it was in their mutual interests to cooperate against the Nazis, there were arguments about what the fascist regimes forcefully installed across Europe should be replaced by. There appeared to be a consensus towards allowing free elections and democratic governments, but this conflicted with Stalin’s need to secure the USSR against future attacks from the West (having lost well over 20 million as direct casualties of the Nazi invasion), and his resultant desire for a Soviet sphere of influence in the area from the eastern borders of Germany to the western borders of the Ukranian and Byelorussian SSRs. There was also the issue of how to manage Germany itself, once the Nazi regime was destroyed. Stalin wanted to punish the Germans and thrust socialism upon them, whereas Churchill and Roosevelt wanted to recover the country quickly so as to avoid the mistakes of Versailles. Eventually they agreed to divide the country between Britain, France, the USA and the Soviets, but the fate of Eastern Europe remained a grey area.

The Yalta Conference, for all its faults, was a fairly smooth affair compared to the one at Potsdam. Overall, besides a great deal of petty teasing between Churchill and Stalin, there had been little hostility over the political differences between the superpowers. At Potsdam, however, the tension was much greater. Partly this was due to a change in leadership: Stalin remained, as his leadership was undisputed in the Soviet Union, but the dead Roosevelt had been replaced by the more hard-line anti-communist Harry Truman, and partway through the British Labour Party came to power, and the Conservative Winston Churchill was replaced by Clement Attlee. This meant that a very different relationship now existed between the tops of the three powers. Also, without the common enemy of Hitler to fight against, it became harder for the three to look past their differences. Ultimately, the second conference achieved very little beyond finalise the divisions of Germany. The importance of this is that the USA and the Soviet Union had previously been separated by the vast expanse of the North Atlantic, and the nations of central/western Europe (the Bering Straight receiving surprisingly little attention). Recently, they had also had the common enemy space of Nazi-occupied territory to expand into. Now, however, the division of Europe and in particular Berlin had brought the worlds of capitalism and communism directly against one another, and so war seemed far more likely.

The first signs of conflict between the Grand Alliance appeared almost immediately, as the USA neglected prior to Potsdam to mention the development of the A-bombs used to defeat Imperial Japan. Stalin believed that Truman would be planning to use such weapons to make demands of the Soviet Union (which indeed he was). This saw the start of the nuclear arms race that would dominate the minds – and budgets – of much of the world for decades to come. The second sign of distrust was in the slow but sure build-up of satellite territories on either side of Europe. In Albania, the communists established instant domination, while Bulgaria, Czechoslovakia, Romania and Hungary were taken over by communist parties after brief reigns of left wing coalitions. By the end of the 1940s, everywhere east of Germany (bar Greece and Yugoslavia) was under Kremlin control. The Americans responded in a more subtle, but equally devious way: bribing shattered nations to remain capitalist. Though this was officially to help impoverished countries recover from the war, Stalin realised it was an attempt to turn the west into America’s own sphere of influence.

The result of this was that almost the entire continent was split between the American and Soviet power camps. Each side wanted to destroy the other, but neither side was willing to actually risk total war – especially once the power of the atom bomb was known. Naturally, the focal point of this pressure was in Berlin where, deep inside the Soviet Zone (or GDR), the western allies had developed a microcosm of the powerful symbol of western prosperity surrounded by communism, making it the point from which to advance the anti-socialist agenda (or the “testicles of the west” as Khruschev would later put it). In 1948 Stalin decided he could put up with such a dangerous nuisance no longer and blockaded all of Berlin’s connections to West Germany, hoping to stem the flow of disproportionately valuable individuals from the dilapidated Soviet Zone towards the apparently more prosperous West. Ideally, the west Berliners would have given up their ties to the USA, and turned to the USSR instead, but in fact America responded with continual airlifting of supplies for nearly a year, forcing Stalin to eventually give in. By this point, though, it was clear that both sides had made powerful enemies.

Overall, the prime cause of the Cold War was the convergence of the two different worlds – capitalism and communism – along the centre of Europe. The closeness of the Eastern and Western blocks forced citizens of both to truly interact for the first time, and so the formerly mysterious workings of the twos systems were finally laid bare. Unfortunately, these two ways of life proved incapable of peacefully coexisting, and so military tension was inevitable. The Cold War was, in essence, the product of the mutual drive between the Soviets and Americans to enforce their respective ways of life across a great many smaller countries, each attempting to win the approval of their client nations and prove that their economic system was superior. When expansion space ran out, it was inevitable that the two superpowers would try to oust one another’s grip. Originally, the political divisions of Europe were meant only to act as temporary measures after the Second World War, but the threat of Mutually Assured Destruction by nuclear bombs and the impossibility of reconciling the two ideologies ensured that tensions would remain high for a long time to come.