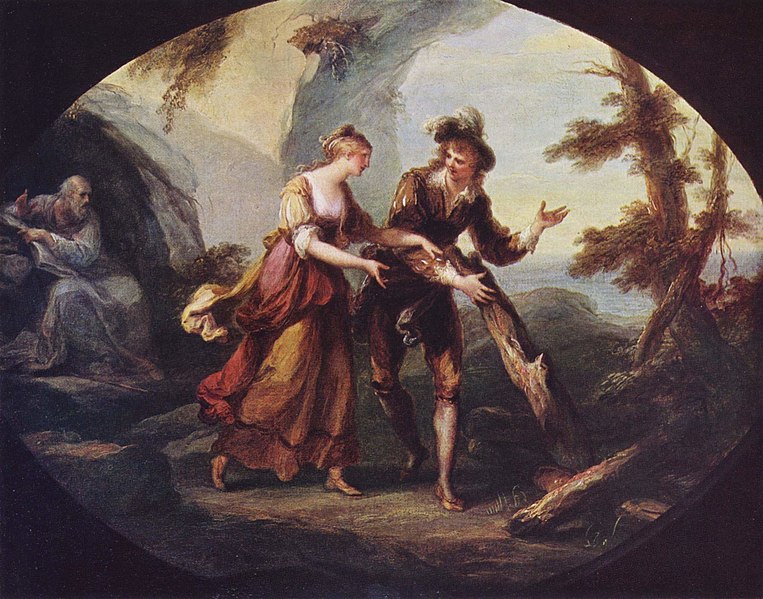 How does Shakespeare make this such a moving and dramatic moment in the play?

The moving drama of this extract derives primarily from the fact that it features the moment at which the young leads confirm themselves as a couple. This is a “feel-good” point for the audience, and it later forms an important part of Prospero’s overall plan – uniting Milan with Naples.

This scene is made more interesting by its subversion of the normal tropes associated with theatrical romance (including those from Shakespeare himself), in that Miranda is here shown offering to share the workload given to Ferdinand (“If you’ll sit down, I’ll bear your legs the while; pray give me that; I’ll carry it to the pile.”), rather than being the traditional passive female in awe of the strong male. The prince, of course, refuses to subject her to “such dishonour”, but Miranda is unfazed.

Ferdinand himself also plays down his supposed magnificence (“I am, in my condition, A prince, Miranda; I do think, a king – I would not so!”), but what makes this scene so moving is that Miranda still loves him, despite both acknowledging his imperfections, and indeed Ferdinand still shows his commitment to loving Miranda (“I, beyond all limit of what else i’th’world, do love, prize, honour you.”), thereby making their relationship more meaningful than a mere “Prince Charming”-type affair.

Of course, the audience is also reminded of the unusual circumstances of this meeting – Miranda, having been stuck on the mysterious island for well over a decade (indeed around 75% of her life) does not remember much in the way of meeting other people. She cannot really judge Ferdinand because she has no yardstick – declaring “How features are abroad, I am skilless of.”. This increases the drama of the scene as, by knowing how far out of her ordinary experience this is, we find Miranda’s reaction ever more powerful.

Then, far away from the young couple but aware of their every move, we have Prospero himself. In his rare and brief but nonetheless powerful contributions to this scene, the magician is shown to be uneasy about finally letting his daughter go. Having already warned Miranda of Ferdinand’s obvious (to all but her) shortcomings, he now says “Poor worm, thou art infected!”, as if regarding her romantic instincts to be symptoms of a mental illness, yet importantly he does not attempt to stop their engagement – indeed he actively helps them along and cautiously encourages them. This could move the audience if correctly executed, as they know how hard it is for Prospero to give up control of his daughter and only same-species companion.

Indeed there is a dramatic contrast played up between the two available states of affairs: keeping or releasing Miranda. Until now, Prospero has been – and still is – a powerful and authoritative wizard, with the potential for total control over his offspring. Now, however, he is allowing her not only to join another family, but in time to outrank himself (as the eventual queen consort of Naples when Alonso dies). This reinforces the dramatic weight of Prospero’s decision to renounce the supreme power which he had slowly accumulated. His final remark of “Heavens rain grace on that which breeds between’em!” indicates not only happiness on the part of his daughter, but also a willing acceptance of the changes to come.