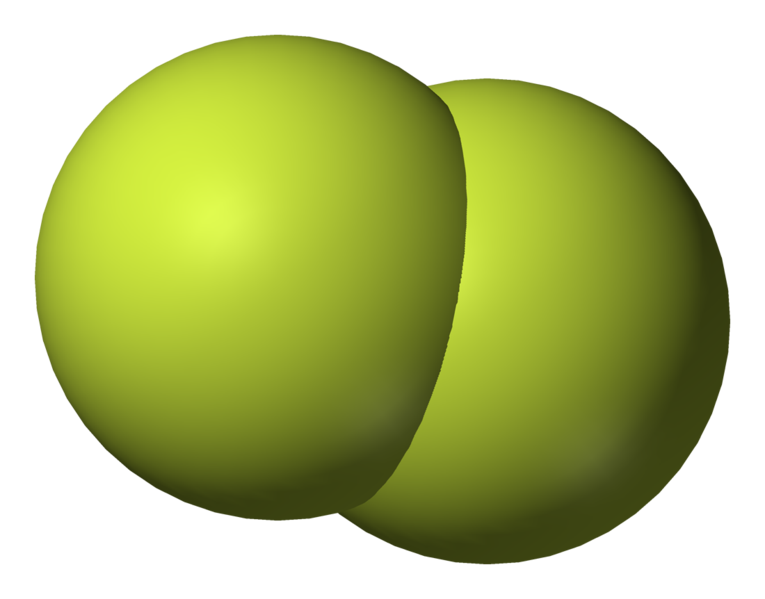 A summary of research into a select halogen.

Fluorine is the lightest of the halogens. It is the most reactive element on the periodic table, and the most electronegative (3.98). It melts at 53.53 and boils at 85.01K, so is normally encountered as a pale yellow-green gas. A fluorine atom has nine protons, ten neutrons and the electron arrangement (1s2 2s2 2p5). Normal fluorine molecules are diatomic (F2), but the element is so dangerously reactive that it is more commonly found as fluoride (F-) ions.

Fluoride is considered an essential chemical in the human body (though the quantities are very small). Overall, the average body contains 3 to 6 grams of fluoride, and takes in 0.3 to 3 miligrams per day. F- makes up 200 to 1200 parts per million, and 0.5 mgL-1 of blood. Fluoride is highly beneficial to teeth, because it converts calcium phosphate into the harder fluoroapatite. For this reason F- is contained by many toothpastes and some countries add it to public water supplies. In medicine, fluoroquinolanes are used to tackle infections which other antibiotics cannot, such as gonorrhea. They work by stopping the coiling of bacterial DNA so to prevent pathogens from multiplying.

For a long time fluoride salts were used in frosted glass and welding, however it was not mass produced until the Second World War when it was used in nuclear energy projects (fluorine gas is used to make uranium hexafluoride which can separate uranium-235 from its less useful isotopes). Various fluorine-based minerals are in industrial use today. Fluorite (or fluorspar) is widely used in the smelting and refining of metals. Around six million tonnes are produced globally each year (mostly in China). F2 gas is widely used for the plasma etching process, used for flat-screen televisions and semiconductors.

In 1802, fluoride was discovered in bones, teeth and ivory. By the mid-nineteenth century, it was found in hair, saliva, urine, blood and brine, but it was not until 1886 that fluorine could be isolated. The achievement was that of French scientist Henri Moissan, who electrolysed potassium bifluoride in Paris.

Fluorine is the 13th most common element in the Earth’s crust, making up roughly 950 parts per million. Large quantities are released into the atmosphere by volcanic eruptions. Various fluoride compounds are also entitled industrially, raising concerns about the environmental impact. The use of chlorofluorocarbons in aerosols, for instance, was banned to stop damage being done to the ozone layer.

While fluoride is a valuable tool in medicine, excess can itself cause health problems. If F- hardens the bones too much, it can result in skeletal deformation. Pure fluorine gas, even in 1/1000 concentrations, is fatal to inhale for a few minutes. In countries where water has high fluoride levels, fluorosis is a major problem which can affect millions.